Abba P. Lerner’s Functional Finance is an economic theory based on the assumption that government spending will have an effect on the economy in terms of increase demand and thus output (GDP). This theory is used by many Keynesians which suggests that effective deficit spending by the government will finance itself through the economy generating higher income and thus higher tax revenues.

This is what it implies if we first look at it from a simplistic level, suppose this is what the economy looks like in the previous year:

Where:
Dgt = stock of government debt at time t
Yt = GDP of the economy at time t

If during the government decides to boost GDP by increasing government spending (assume the budget is a balanced budget in time t-1), which resulted in:

So in the above example, if the fiscal multiplier is at least 1.67, where every 1 dollar spent by the government will boost GDP growth by at least 1.67 dollars, government spending will not lead to an increase in government debt to GDP ratio. In the most recent IMF paper by Olivier Blanchard and Daniel Leigh, it had recognised its mistakes in previous published paper suggesting a fiscal multiplier of 0.5, but it mentioned on page 6:

“Figure 1 illustrates this result using a scatter plot. A natural interpretation of this finding is that multipliers implicit in the forecasts were, on average, too low by about 1”

In the above example I have provided, it is important to note that other sectors of the economy are not included. Hence if the contribution to GDP by other sectors of the economy is added, we may be able to see a constant or dropping government debt to GDP ratio, even if the fiscal multiplier is lower than 1.67. Also the smaller the initial government debt to GDP ratio, the larger the fiscal multiplier needs to be in order for the ratio not to rise. For example:

The fiscal multiplier has to be at least 2 in order for the ratio not to rise if other sectors contributions to GDP are excluded.

Historically, the US and Australia have had periods where Lerner’s Function Finance concept seems to apply. 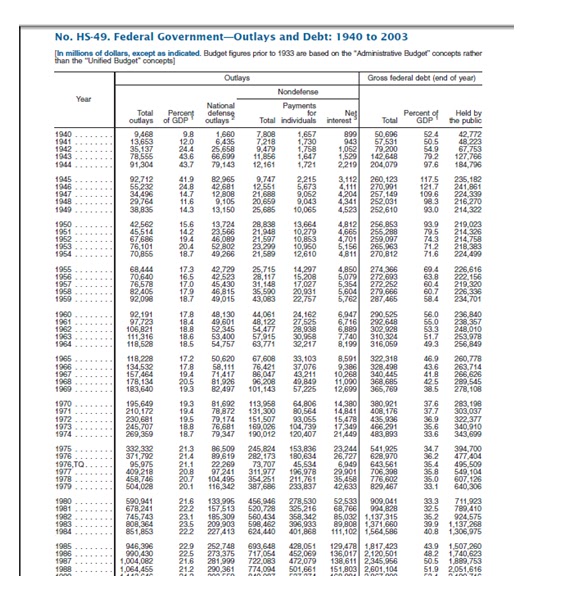 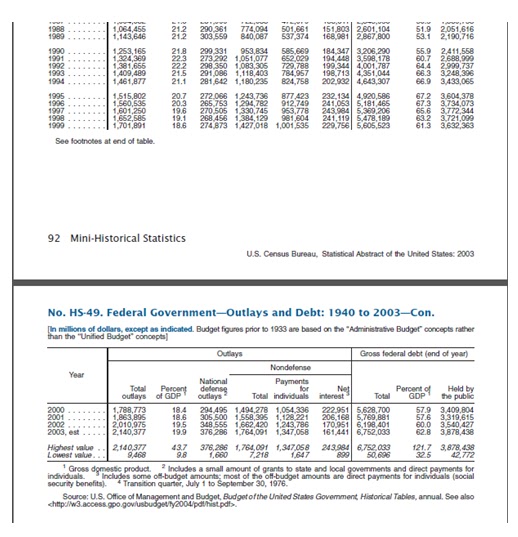 If we look at gross federal debt as a percentage of GDP column and gross federal debt held by the public column, we can see that for from 1958 – 1970, 1972 – 1975 are the periods which most obviously shows an increase in public debt (budget deficit) accompanied with a decrease in gross public debt to GDP ratio. We should also look at the period from 1970 – 1982 where the nominal value of public debt tripled but the debt ratio dropped from 37.6% to 35.2%.

This does not look very successful (at least in comparison to Australia), however what would the data be like if the US government did not run budget deficit cannot be determined.

I was able to obtain the gross public debt in nominal national currency from the Australian Treasury (I want to criticise the Australia Bureau of Statistics for not having the data prior 1970s, or if they did, it was extremely difficult to find). 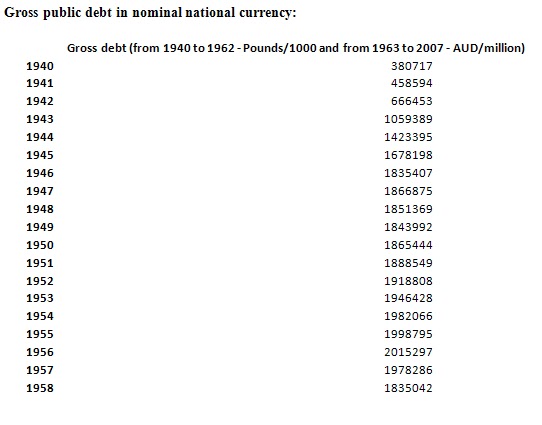 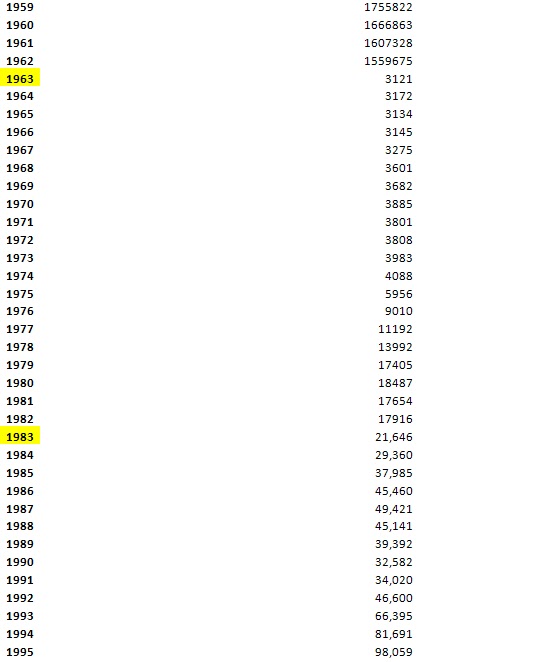 Public debt as a % of GDP – Australia 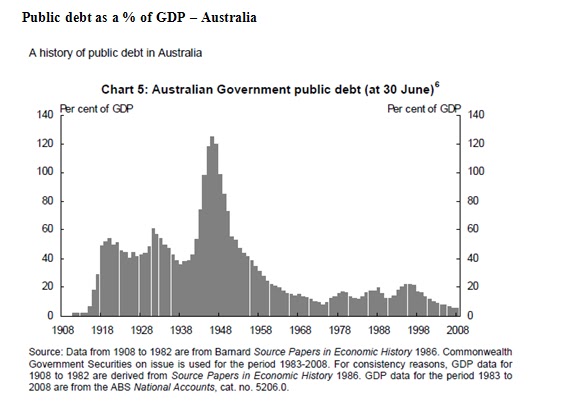 In Australia’s case, it was quite obvious the period from 1948 – 1956 where public debt to GDP ratio was significantly lower despite consistent budget deficit. Australia was also more successful in achieving and maintaining full employment than the US: 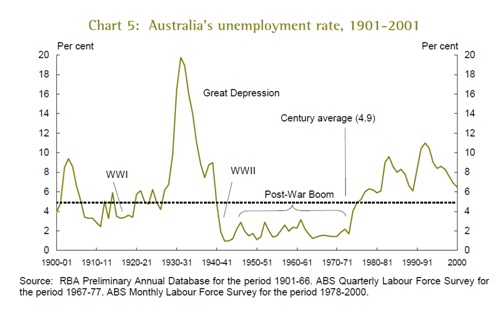 As mentioned above, what would the data look like if the budget stance was different cannot be determined. However, Keynesian theory would suggest a higher unemployment level unless production capacity of the economy is fully utilised.

The structure of the economy changed significantly over time compared the 1940s – 1970s, for example, manufacturing industry’s contribution to GDP was around 20-25% of GDP in 1960s but have now dropped to 10.5% by 2005 in; and the decline in competition of the market in Australia (as evident by the increase in profit share as a % of GDP). 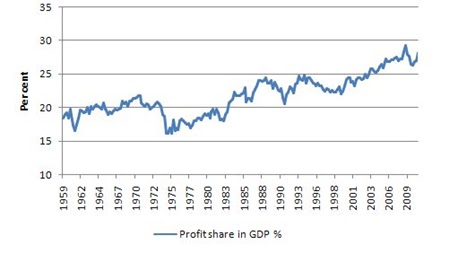 These changes in the structure of the economy have impacts on the fiscal multiplier. However from the above empirical evidence, Lerner’s Functional Finance concept may well be valid, that government spending will finance itself. With national governments around the world abandoning full employment as their national goal (indeed, they are creating unemployment through austerity) in attempt to achieve a budget surplus and failing because of automatic stabilisers; it is important to think carefully about the aim of budget surplus other than political popularity. If its aim is to lower or maintain the public debt as a % of GDP ratio, Lerner’s Functional Finance may be able to provide an alternative to fiscal austerity while maintaining full employment [1].

[1] – The ability of national governments to print national currency have not been discussed in this post, but it may well work depending on how underutilised is the economy’s production capacity, for example, the trillion dollar platinum coin.
Posted by Unknown at 3:55 pm