Japan, Yet Another Interesting Case

A recent post by Noah Smith about the recent economic policies and performance of Japan showed some interesting statistics, especially on the existence of deflation despite large depreciation of the Japanese Yen.

The depreciation of the Yen to USD is shown on Noah Smith’s post (courtesy to Noah Smith): 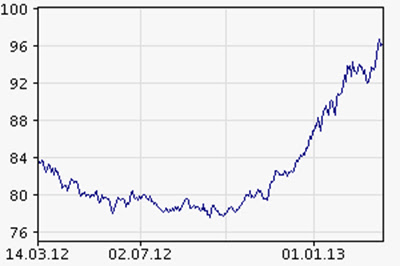 In addition to that, the trade weighted index of the Japanese Yen has also fallen drastically show means that Yen have also depreciated sharply against other currencies (Source: unciatrends.com): 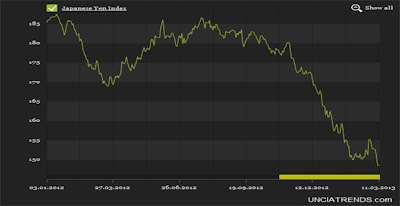 There can be a combination of the above listed reasons and I'm unsure about the second possible reason. With regarding to the fourth possible reason, here are the major imports of goods and services for both Australia and Japan (Note: I was unable to obtain detailed statistics of major imports of Japan and the source is wiki answers, so there could be mistakes and I’d greatly appreciate if anyone can provide links to Japan’s import in detail statistics):

A Seminar on "The Priority of Democracy" at Crooked Timber

Crooked Timber blog has an interesting seminar on a recent book “The Priority of Democracy”, which is written by Jack Knight and James Johnson. I would highly recommend anyone who is interested in political economy and/or political science to read the book review. The book is reviewed by the following academics:

In the following list are the reviews and comments of the above academics on the book:

Jack Knight and James Johnson have posted their defence on Crooked Timber as guests.

I’ll update the post if there are any further review posts, comments or conversations on Crooked Timber about “The Priority of Democracy”.
Posted by Unknown at 6:48 pm No comments:

Email ThisBlogThis!Share to TwitterShare to FacebookShare to Pinterest
Labels: Politics

Since a lot of people have the impression that economists’ prediction are only as good as throwing a dart to a dartboard, I guess I’ll try to keep track of how well my economic prediction goes based on the economic theory I use, which is Post Keynesian theory.

My predictions are also based on certain assumptions:
1.       US and the EU will not implement any significant stimulus program during the 2013 calendar year.
2.       The Australian Government will continue with its self-destructive austerity and mindless pursuit for budget surplus regardless which party will be elected during this calendar year.
3.       There will not be a significant depreciation of the Australian Dollar during the year (it will remain at above $1 USD).

Movements in the labour market:
The starting data is the January figures for the labour force.

·         GDP growth from September 2011 to September 2012 is 3.1%; this is likely to be further weakened. Note this is below the required rate of growth for stabilisation of the labour market.  For more comprehensive statistical analysis, visit this blog post by Bill Mitchell.
·         Inflation rate from December 2011 to December 2012 is 2.2%; this is within the lower range of the 2% to 3% range of the RBA. This is likely to be the case for this calendar year.
·         Interest rate was cut to 3% at the beginning of December 2012; there are several factors involved in decisions made by the RBA, which I will discuss in later posts. I expect the interest rate to be cut below 3% by the end of the year due to weak economic outlook (and the government is making it worse with austerity!), however it is unlikely the interest rate will be cut to below 2.5%.

Overall, the prediction for 2013 represents an economy that will grow at below the growth rate required for the labour market to stabilise. I will update this post when the September 2013 data comes out for GDP growth and December 2013 data for other indicators to see if I can beat a random dart.
Posted by Unknown at 10:41 pm No comments:

"A few thoughts on depression" by Noah Smith

I feel like sharing this post by Noah Smith about his experience in depression. Readers might know that there is no definitive treatment for depression and it may relapse even if you got through it. Noah Smith also mentioned:

“Obviously, everyone's experience of depression is different, so I don't intend these thoughts to be a universal guide or general theory.”
However if you know somebody who has depression, Noah Smith's post may help as a guide.
Posted by Unknown at 3:23 pm No comments:

Email ThisBlogThis!Share to TwitterShare to FacebookShare to Pinterest
Labels: Psychology

Continuing on from my previous post about Lerner’s Functional Finance, we now look at the effects of government expenditure.

This equation can be used to determine the changes in gross public debt to GDP ratio:

From the equation, an increase in G will increase Y, by the amount of increase in G multiplied by the fiscal multiplier for the planned policy. This will then lead to an increase in T, thus the Gt – Tt (the budget deficit) is not increased by 1 X ∆G but ∆G - ∆Tt, where:

As mentioned in this post and the previous post, the fiscal multiplier is very important in determining the effectiveness of government spending and this fiscal multiplier depends on a lot of factors such as the design of the stimulus (the spending components involved), the structure of the economy, and consumer and business sentiments. In US and Australia, where infrastructures lags behind a lot of countries such as South Korea, Japan and China, spending on infrastructures have a very large multiplier. From this post by Noah Smith, it showed a table from a NBER working paper by Alan Auerbach and Yuriy Gorodnichenko estimating the effect of government expenditure on consumption and investment for the US:

The important thing to take note here is that although investment spending has a larger multiplier than consumption spending, it has less immediate effects on the economy. Thus if the government wishes to stabilise the economy (stabilising the lost in income due to increase in unemployment) immediately when the economy faces a downturn, consumption spending works better but it does not necessarily “pay for itself”[1] in the long run, while investment spending (such as building roads, railways, investing in education, health) provides longer term benefits such as productivity gains, reducing unemployment in the longer run, and it is very likely to “pay for itself”.

Consumption spending also has one other very important effect which investment spending lacks; this effect is the stabilising of consumer and business sentiments in a downturn. The earlier and quicker the stimulus is enacted when an economy faces downturn, the less consumer and business sentiment falls, as demand for goods and unemployment is stabilised (even if it’s for a short term). This will reduce the output gap and making it less “expensive”[2] for the government to stabilise the economy with stimulus spending. If a stimulus in a recession lacks short term stabilising effects and/or took too long to implement, not only the output gap will be larger (thus needing a larger stimulus), but it will have significant social cost (cost of unemployment to households) and business investment will also take longer to recover if decision makers in businesses are uncertain about future economic prospects.

While the fiscal multiplier is important, its size should never be the main determinant of whether a government is to implement a fiscal stimulus or not. The most important determinant should always be whether if the economy is in full employment. If President Obama does not want to use the 14th Amendment and the $1 trillion dollar platinum coin option is out, there needs to be a plan which the US government will need to enact to avoid further austerity (when it is in fact, the austerity currently enacted by the government that is dragging down the economy) and implement stimulus. At the moment, the US government is failing miserably to provide prosperity to its population despite the GFC, when employment to population ratio have no yet recovered to pre-crisis level for more than four years from the crisis. 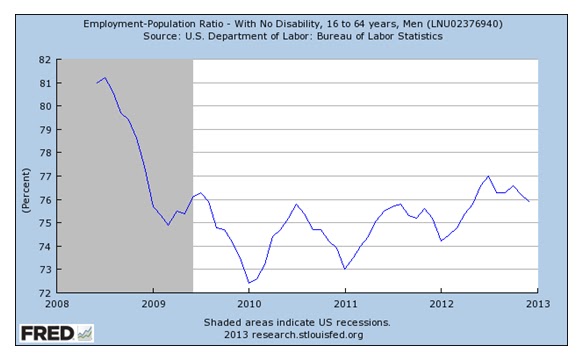 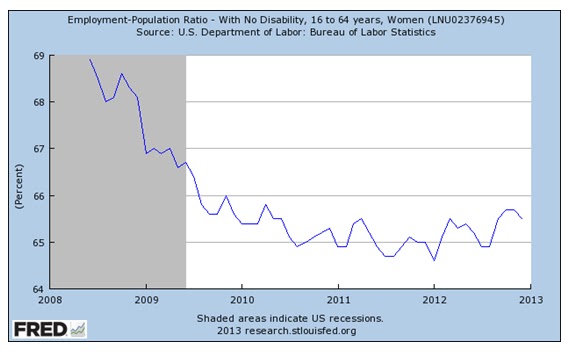 [1] “Pay for itself” refers to a situation when an increase in nominal public debt led to a reduction in public debt as a % of GDP. There are examples of raw statistic correlation in the previous post.